One thing we enjoy so much is hearing how our pups are doing. I get a lot of photos and I hate to see them sit in my files on the computer, so with permission, I will post some of our "Pups All Grown Up" In some cases a brief story from the owner about the antics of their dog will be included.

I wanted to send some more pics for you guys to see. They are growing fast – 16 lbs on their check-up 10 days ago. This is a shocker – but Carson may end up being a tri-color. He now has a very distinct brown stripe on the underside of his tail, and brown stripes where the black and white meet on the backs of his legs and a little on the front side of his back leg. Just like you said, he is going to be a beautiful dog. Emma is so driven. She is such a character and boy does she have a temper. She gets mad and whines and pouts like a little kid. She is definitely going to be the ball dog. The cool thing is that she has motivated our red BC Lucy into chasing the ball. We gave them baths last weekend because my family was coming to meet them and they did just wonderfully. We have grown to love them very much. Hope you enjoy the pics. From the Owners of Emma & Carson and Lucy 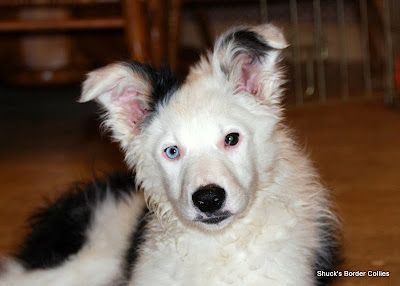 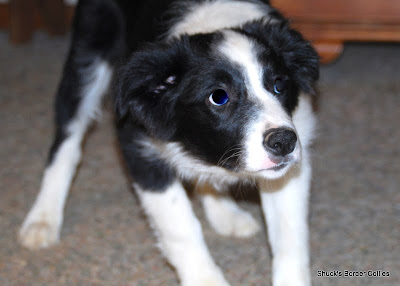 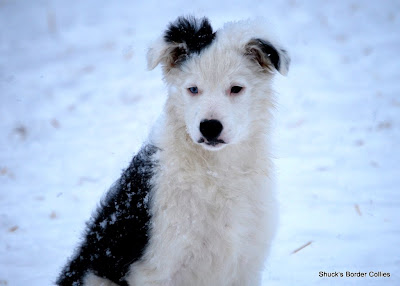 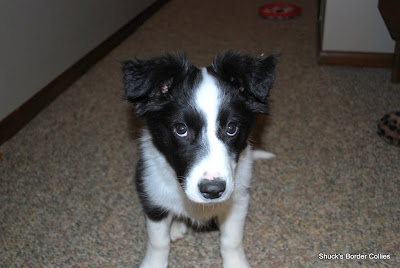 When Carson was born, I knew he was a keeper. I love White Face dogs and he had one. The only problem, we had six Border Collies and we did not need another one, no matter how much we wanted him, but he sure was cute and very loveable. After he was checked out with the Vet, he was available for sale. Many people loved his markings, but they wanted a female. One couple had picked a little girl but kept going back to Carson. He was the apple of their eye, but they wanted a girl, then Carson, a girl, then Both. Both Emma and Carson went home together and lived happily ever after with Lucy. Oh, and the rest of the story, I bought a White Face Dog. His name is “Shepp” and we have six very loving dogs and it is Good. Ken
Posted by Dogwood Ridge Border Collies at 11:19 AM No comments:

Keely is absolutely the light of my life!!!  I love her with all my heart, and, I believe, the feeling is mutual!! She is as great a dog as I knew she would be.   She is a very happy, mostly fearless, very well socialized and greatly loved dog.


I take her everywhere with me. She has met, literally, hundreds of people--of all ages and sizes. She has met a number of dogs and has about a weekly play date with friends' dogs.
I have taken her to many, many different parks and Woods (Sharon Woods, Winton Woods, Miami Whitewater Forest--that was on Saturday and I let her off-leash and she had a BLAST and ran through a creek!!). There is a park in walking distance from my house (though it's a bit small and drab), which makes a good hour's walk, and we'll go there if we don't drive to a prettier one. She rides very happily in a Kennel Cab I bought for the car (course she also loves the treats  She's usually tired out from our vigorous walk in Winton Woods, and plays quietly chewing on a bully stick or some other more special toy.

We normally go for an hour's walk in the morning and another 30-45 minute walk later in the day. Or she has a play-date. If the weather is too bad (and we have rarely missed a day since the beginning, no matter WHAT the weather!!!), we do a lot of vigorous playing. She has many, many toys (I can't resist!) and she enjoys them all! I keep her with me all the time.

Right now she is at my feet, happily gnawing on a huge bone. She is 95% housebroken, and has been since the first week or two. She only has accidents when I miss her cues. She gives me lots of kisses and I talk to her constantly. When she meets someone new, she sits sweetly with one leg slightly out and wags her tail. She rarely jumps on people and is very well-behaved. She knows how to sit, come, down, but I haven't worked on more things for a while. I am going to take her to Puppy Obedience classes starting on the 14th.

I do let her play outside by herself, but rarely longer than 30-45 minutes at a time. We also throw balls out there (she loves to fetch, and views it as her work!!) I am thinking about getting her into Frisbee and, eventually, agility competition. 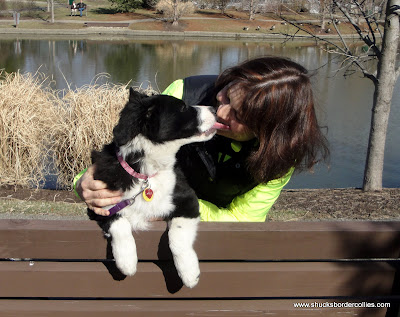 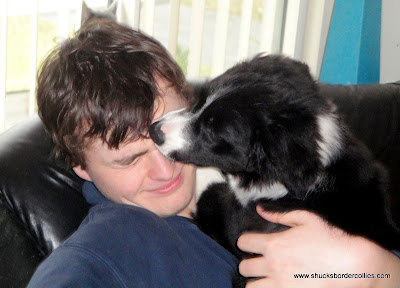 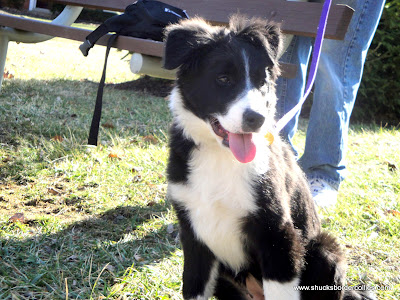 If you would like to visit the farm with your dog, we have two options.  The first is a play day and you can come and hike and play in the water.  If you have a rescue dog that needs socialization with other dogs no matter where you got it from they too can come.  In both cases, they need to be up on shots and you must provide records and as always, it's free.  Its our way to give back to the breed.

Posted by Dogwood Ridge Border Collies at 9:26 AM No comments: 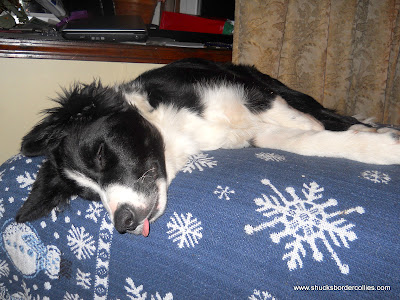 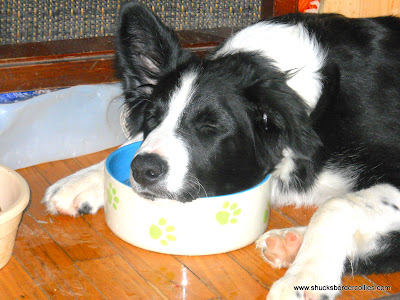 The puppy has met the cats, who hate him of course, but he has suffered no scratches - he backs off very quickly.  Then he met the chickens, which frightened him at first, then he did the border collie thing - just approached them very slowly then stood stock still and stared.  It was too cute.

All the cute toys and chewies we bought him, of course, are being ignored.  Instead, he has so far focused on an aluminum can, a plastic bottle, a roll of electrical tape, a tent pole, a house plant, and a shoe.  AAHHH!  So we do a lot of re-directing.  We have come to a mutual agreement on an old tee shirt tied in knots, and the plastic bottle.  He also found a tennis ball, (of course), and carries that around.  We are going to look for the puppy sized ones you mentioned.  So he has had a busy day and is now completely out of it, sleeping two thirds of the way under the couch.  He must feel protected there.  One of the cats is sleeping in his new bed.
Posted by Dogwood Ridge Border Collies at 8:19 AM No comments:

Back To Shuck's Border Collies